If you’ve read our blog “Why It’s Never Okay to Drink Alcohol while Pregnant, Seriously” you know that no level of alcohol is safe to consume during pregnancy. After knowing about how even small amounts of alcohol can negatively impact the health of an unborn child, you would think that drinking during pregnancy is a thing of the past. But it’s not! 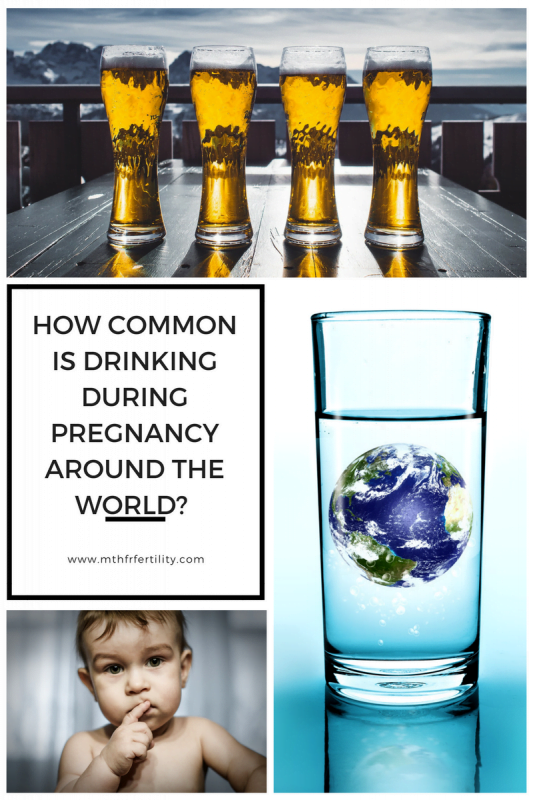 How common is drinking during pregnancy around the world?

According to a new scientific review (4), drinking during pregnancy is probably more common than you think. Researchers analyzed 34,580 original quantitative studies on the prevalence of alcohol use and cases of fetal alcohol syndrome (FAS). The researchers narrowed it down to 390 studies that address their research question “How common is drinking during pregnancy? and what are the consequences?”.

Alcohol Consumption During Pregnancy Around the World

Scientists estimate that 9.8% of women consume alcohol during pregnancy around the world! A shocking number considering we have been told our whole lives that drinking during pregnancy is bad. 9.8% translates into almost 1 in every 10 pregnant women are drinking alcohol at least once during their pregnancy.

If you remember, alcohol is a teratogen and can easily be transferred to a growing fetus from the mother through the placenta. When you drink alcohol it’s not only you drinking, it’s also your growing child and the effects are devastating.

Below is a visual model of the percent of people consuming alcohol during pregnancy and giving birth to a child with Fetal Alcohol Syndrome (FAS) around the world; the darker the color, the higher percentage of people born with FAS. 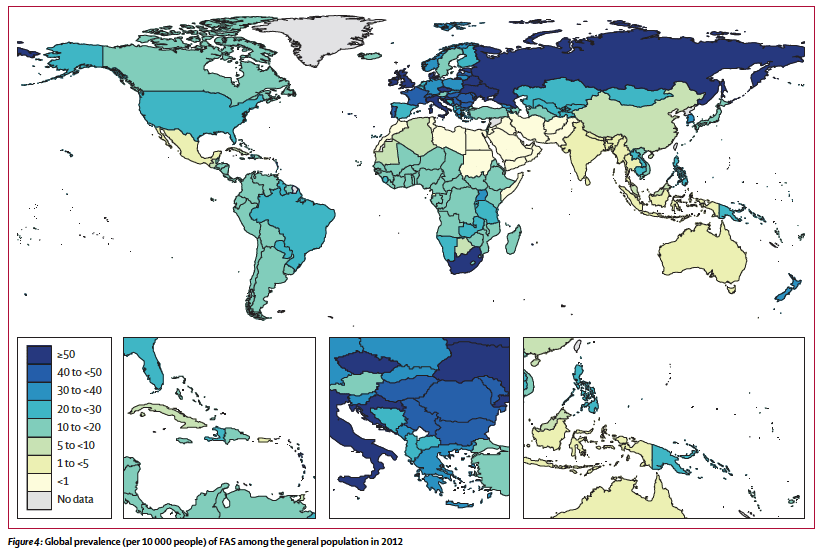 Prevalence of Fetal Alcohol Syndrome (FAS) Around the World

Some researchers are suggesting we go even further as a society to prevent alcohol use during pregnancy by introducing new regulations on alcohol such as training for medical professionals, price manipulation, taxation, restrictions on times liquor stores are allowed to operate, and increased restrictions on the advertising and promotions of alcohol (1).  In countries with higher rates of FAS, such as South Africa where 585 out of every 10,000 children are born with FAS, temporary government regulation and involvement may be more cost-effective for the country compared to relying mostly on the private sector.

Economic Impact of FAS on the Global Economy

It is shocking to see the high rates of alcohol use during pregnancy and FAS that are occurring globally. The impact of FAS not only significantly lowers the quality of life of people who have it, but also puts a large burden on the global economy. The economic and societal impact of FAS is difficult to measure, but there are two studies which have attempted to measure its impact in the United States and Canada.

In 1998, FAS cost the American government over 4 billion USD in health care costs, and the average cost of a child born with FAS to the American healthcare system over their lifetime was estimated to be 2 million USD (2).  In 2013 a Canadian study estimated that over the course of a person’s life with FAS, the economic burden placed upon the Canadian economy is approximately 1.8 billion USD (3). Three primary factors contribute to the high economic cost of FAS:

Unless measures are taken to lower the rates of drinking during pregnancy, the economic impact of FAS in North America, Europe and the rest of the world is likely to become more burdensome to the global economy as the cost of healthcare rises.

That being said, the majority of births over the next several decades are going to be in Africa and Asia. Although these regions have lower rates of FAS than Western nations, it is difficult to see the impact of FAS on the global economy decrease in the coming decades due to the sheer growth in population size. It is important for organizations and governments around the world to get the message out that drinking during pregnancy is not ok.

Each of us needs to help others avoid drinking during their pregnancy. We can do this by spreading the message on social media and in conversations we have with friends, family, and colleagues, of how consuming any amount of alcohol during pregnancy can lead to devastating lifelong consequences for the child. If you know anyone who is currently pregnant or trying to become pregnant, send them this article and our other article “Why It’s Never Okay to Drink Alcohol While Pregnant, Seriously”. The combination of knowing the harmful effects of alcohol on a pregnancy and knowing how common drinking is during pregnancy will help support better decision making.

Here is a quick summary of important information for you to remember: